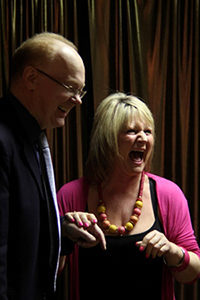 Ian’s blend of magic, mind reading and humour is brilliant. He will keep everyone guessing and totally baffled .

So get ready for a professional, clever, amusing and highly entertaining evening !

Ian cut his teeth working in the tough world of the comedy clubs, working alongside comedians such as Lee Evans, Frank Skinner, Harry Hill, Jo Brand and Graham Norton. The fact that he was able to hold his own with these brilliant comedians, whilst presenting his own brand of comedy magic, is a tribute to his skills of interacting with audiences.

He now regularly performs his after dinner show at conferences, corporate events and private parties.

This is a video of Ian performing with Gok Wan on the Alan Titchmarsh show: it is an edited version from the live television broadcast.